As Khan so elegantly put it: a dish best served cold.

Biker chicks have a tradition extending far back in time.

Tension filled the castle. One question whispered along its corridors. Which sister would survive to ascension?

The 6th 3D image I created.

A father prepares for battle.

We succeeded in walling ourselves off from evolution but not natural selection.

With one grip, a legend was born.

Lomin turned the corner and stepped through the chamber's entrance. Inside, just as the book had predicted, stood four lifelike statues of warrior maidens belonging to a bygone age. Their gold inlays and trim hinted at the wealth hidden within. The old man had been a fool, he thought. Had no idea of the book's worth and yet refused to sell it. Now he would have eternity to contemplate if a knife through the heart was a better bargain.

Ahead, the corridor forked. Which one? He opened the book and turned a leaf. Eyes bulged as sentence after sentence faded from the page. Frozen lungs stopped breathing. Behind him stone cracked and crackled. An unsheathing sword hissed.

It is a place of ancient whispers and dark enchantments. Of sorcery and devilry. And magic. The old kind that unfurls from the fingertips. Where witches cast spells and summon forth demon lovers.

She had designs on the wizard. Until his wife found out.

Renk could barely contain himself. About to retire, pride threatened to burst his heart from its moorings. The Queen's new Champion wasn't as strong as the men but she was strong enough.

She had lightning reflexes and the sword went exactly where she looked. It made her deadly . . . and his daughter.

Together they battled across barbarian lands until a demon separated them.

"She's one woman. We can just ride over her." "Don't be a fool, Toren. That guard is taught only by the southern masters. You'll be sliced in two before you hit the ground. Let's talk."

At night, the hunted have two legs.

"It is a magnificent sword made of Tamahagane steel mined in the Yamato province of Japan and fired in the forges of the master himself: Amakuni Yasutsuna. It will not break, will not shatter, and will slice through armor and leather."

In Rhesakur, east of Cimmeria, the city that birthed the warrior maidens who roamed the Middle Kingdom, shopkeepers and sellers did not present exaggerated claims. To do so risked immediate forfeiture of life.

I am the Mistress of Perdition. I am Gehenna, sent by the Lord Master Lucifer. In one hand I hold pleasure, that those who lust for it may find you. In the other, I hold Lust. That you may find those who know its pleasures. Choose well.

When summoning demons, it is wise to remain within the Flames of Kalthor.

Odin give me strength and guide my hand. The shield will not withstand another blast and this beast brims with hellfire.

Some hunt men. Others bury them.

While hot on the trail of the legendary Cimmerian, Xena would test the virility of potential bed warmers.

While on the trail of The Cimmerian, Natalya would test the virility of potential bedwarmers.

In the aftermath of the Apocalypse, war again became primitive.

Her sisters completed the Summoning Spell then smiling and giggling, exited the chamber. The Novitiate had prepared herself well and now all that remained to metamorph into a witch were pleasures unimagined and unequaled. Without warning, Kravak appeared. Her eyes traveled down his body, stopped and widened. It swelled. And wiggled. 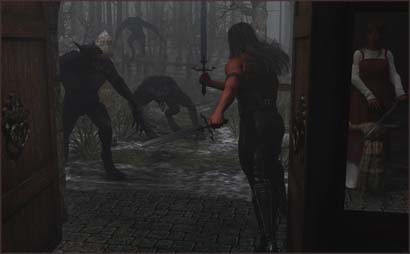 Tamrin twisted in his chair. The women had heard it too. No wind howled like that. His wide-eyed daughter turned to him. One word escaped her lips as she rushed over. "Papa?"

Arms open, he leaned down, squezing her, refusing to let rising emotions emerge. Gently, one hand cupped her face. "I love you my child. With all my heart. Now. Go to your mother.

Tamrin strode to the door, never hearing the swords he gripped hiss from their scabbards. He refused to look back. It would weaken him. A foot opened the door. Cold blasted his face. They had come to his home. They would not leave it.

Our ancestors could not call police. Could not call firemen. Or emergency personnel. When a crisis arose they had to deal with it. Their successes allow us to complain about the weather.

Tough when all you want is a quick dip and a dragon shows up.

The King had sent his champion to find the three thieves. For weeks he had tracked them but now only two remained. Tormin hesitated. A warning to thieves? Or everyone?

The insanely jealous Baron made one mistake when he killed her lover. He didn't kill her

On a cold and dank wintry night, a soldier stands his post

Sometimes Alina's husband walked in unannounced. He remembered not a one.