"Honey? Honey where are you? This isn't funny anymore." They never suspected the Real Estate Agent who sold them their dream home.

Sleep had commenced and the gathering began. Soon they would feed.

It always made for a sentimental moment. Each of her paramours had been unique and distinct. Differences lost in the sameness of their skulls.

An ancient need and an ancient war.

He'd sold his soul for wealth, fame, and power. Now the bill had come due.

He'd met her only hours before and now she sat naked on his couch. Jason crossed the room; desire tingled every nerve. His ardor died when a tail wiggled into view. Something was wrong. Something was very wrong.

Power is out, cell towers down, and a Werwolf shows up.

Lust overcomes many things. Even fear.

Jack licked his lips and stepped from the shadows. The street's wooden planks creaked beneath the soft leather of his shoes. She turned and gave him a smile. An inviting smile.

Jack had no idea the brothel of his fifth victim had sent their own psychopath. Jack was never found. Because there is no Jack left to find.

I hung your sisters to lure you here, Rezna. Do not fear the rope. You I will eat.

A clawed hand reached the corner, tentative, probing. Surely it has detected my scent, Natalya thought. She tensed. Her moment had arrived. For retribution. For vengeance.

In the jungle, beasts don't always have four legs.

A faint scent wrinkled Rasia's nose. Slow, calm, she turned to her maiden. "Listen to me, Miriam. Listen very carefully. We are in mortal danger. Right now it is assessing if I am armed. I stupidly left my weapons inside. When I say go, we must leap into the pool's deep end. We'll be safe."

Eyes wide, Miriam struggled not to shake. Strange things constantly surrounded this deadly woman. "What kind of danger, m'Lady?" "We are betrayed, Miriam. It is a wolf. A wolf that stands on its hind legs."

Another romantic, starry-eyed admirer of Vampires falls victim to the reality.

Coren stepped outside careful to place his feet and make no sound. If it was that prowler again, this time he would face the blade.

Human scent filled her nostrils. She stepped closer, wanted to capture it alive. Her young needed to learn the chase. And eat.

A stylized interpretation of a character in the novelette 'Accursed' available for free on the Library page.

A moment of decision that will reveal character

Every month her already broken heart shattered anew. His hand pressed hers tighter. Please, please, she thought. Don't let this be a struggle. Resigned, he stepped in, his expression the look of a child unable to comprehend he could hurt his mother. She strained against the gush of tears threatening to burst. Locking the door, her sobs let go.

At the hallway's end, his siblings huddled. Wide-eyed, trembling. He would hurt them too though they had escaped the horror she shared with their brother. His plaintive wails reverberated off the walls. "Why, mommy? Why?" Before they exited, the howls began. 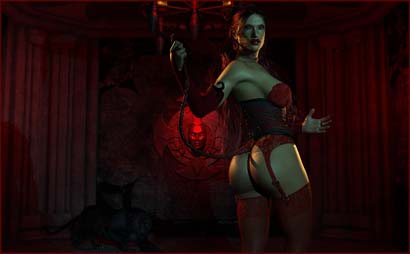 Through half-open eyes she watched her lover race closer. A quickened pulse surged heat through her enflamed body. But why did he have a sword?

Rezna hated ambuguity. Lately though she found herself paralyzed for hours. Knowing she had to feed. Unable to decide if man or woman.

As another charred and burnt soul, condemned for their evil acts descends into the Pit, Lucifer's daughter ponders the irony. Her parent, the source of all evil, continues with impunity.

They cast no reflections and moved about silent as the night but a putrid, decaying stench filled the room. Time to even the odds. A sharp puff snuffed the candle.

He did not summon many. Nor often. And she had once been a favorite. As Araqiel bowed before the Lord Lucifer, a low, sharp gasp escaped her. My wings!

The line between good and evil is thin indeed.

He was handsome, urbane, sophisticated, charming, and his every pore oozed power. And though she may have had other plans inviting him to her home, when he placed his hand on her shoulder and she looked in the mirror, dismay not horror filled her. Her Head of Household must have overlooked having the mirror properly cleaned. Poor, little, rich girl.

Unlike ridiculous Hollywood portrayals and Netflix nonsense, Vampyrs prefer to hang their victims upside down. The numbing effect minimizes jerking about and when biting in, it's like opening a spigot.

Should you find yourself in this unfortunate circumstance, don't scream. It only whets their appetite.

She enjoyed her demon's captures. Strong, virile, defiant. It made breakig them more satisfying. As they caught on to her needs, they became eager, enthusiastic. When finished, she left them drained, spent, ravished. Then the demon returned. To eat.

I like to imagine were Edgar Rice Burroughs alive today, Tarzan would have a daughter.

Like soldiers of every place and every age, Gramoud had risen early to prepare, reflect and catch the morning's first rays. The call had gone out. Invaders threatened mates, pups, and dens. And on the battlefield, the Fates might decide he had seen his last morn. If so, he would remember how the dawn had warmed his face.

Yes. Perdition has a gardener. And a helper.

He had swept her off her feet. His intriguing charm. His worldly elegance. Sparkling gray eyes that blazed and penetrated. The richness of his laugh. As if at a joke only he knew the punch line of. And now she had nowhere left to run. Nowhere left to hide. Only prayer remained.

Curious what these two are up to? Read 'Accursed', their illustrated novelette availale as a free PDF on this site's Library page

While it is far too late for this poor soul, let us all be reminded. Demons can lurk anywhere.

Delilah was a real pro during this shoot. As everyonr knows, dragons have a god-awful stench when they get wet.

Where does fate end and irony begin?

Born in the town of Greenwood, its good people thought Mora's birth and rise almost predictable. Her mother would tell the story of a smiling, gurgling, kicking child in her bassinet. Mora's mother would show wooden colored blocks, pronouncing each color's name with great care. Whenever she said green, Mora quieted and stared with focused attention.

Growing up, Mora would ignore dolls and crayons to spend time paying loving attention to the plants and flowers throughout the house. With each passing year, frequent trips into the forest abutting the town, brought back wild flora which flourished and transformed her home into a wondrous garden. Where others made extra money babysitting, Mora cared for the townfolks' ailing plants, returning them to vibrant health and vivid color.

And when outside developers arrived with grandiose plans to expand the town's development into the forest, Mora single-handedly went door-to-door reminding everyone the beautiful and wondrous forest was Mother Nature's gift to them. In a near unanimous vote, Greenwood sent the developers to seek profit elsewhere. And so to no one's surprise, Mora went to University seeking to become a Botanist. On summer breaks she would return to check on her neighbor's plants free of charge and spend time wandering in her beloved forest, refreshed and renewed by the natural order of things.

Until the day when the sun rose and Mora had still not returned. Everyone rushed to form search parties, calling her name, and hearing only echoes. Trees stood in mute silence. Months passed until playing children rushed back, crying they had found bones.

Their arrival did nothing to disturb the silence. A crow cawed once, twice. As one the night birds rose, flapping wings swooping toward the imminent dawn. The hounds spread out, their postures and behaviors giving no indication anyone lurked about. She tilted her nose upward, scenting the air, confirming no one remained. Eyes narrowing, a slow gaze stopped at the soaring Witches Post. Brazen, she thought. How better to hide as witches than to warn against them.

Her eyes continued taking in the village's strange architecture. How long had they been here? She had never been to this part of the realm. Far flung and desolate, nothing grew here. Then again, a perfect hiding place for witches.

When the Queen Regent summoned her to relay the continuing trauma of missing children both had suspected, but not voiced, witches might be about. Brazen indeed. They might have continued here undetected had they not ventured into neighboring ga​lères.She pulled the reins hard. Two hounds had stiffened, neck hairs bristling. The rest ceased investigating, staring into the still dark woods.

Her timing had been perfect. Returning from their nightly acts of debauchery and unspeakable perversions, they would be slow, sated, and spent. Mere moments separated them from the horror of onrushing hounds driven by blood lust. A smile creased her lips. She too needed to feed. Narrowed eyes penetrated the darkness. I am Mordana. Sorceress. Witch Slayer.

As the crew set up the shot, I noted her melancholic expression but could not tell if it was because of her marriage, life, or both. I did not dare ask her.

The men of that age were quite brave but I'm not sure how much good that sword will do.

An after-hours visit by an angel killer.