In a stunning announcement, the Jovian Moons have added Miranda Logan to the staff thus cementing their position as the Solar System's premier kennels. Let's listen in, shall we, on this legendary whisperer."Hey! Stop sniffing his butt. Get over here."

In 2066, parallel parking is a long-forgotten skill.

A larger, updated version of the previous image 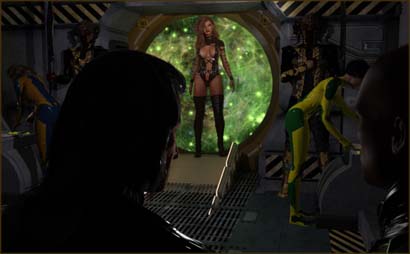 "Are you sure?" "Yes, Commander. Sensors confirm it." "Impressive. I've never encountered a natural, unenhanced female."

Hmmm, he thought. On Time. Chauffered air car. Provocative dress. This could be interesting. Garrett had no idea just how interesting things were about to get.

"It's a sentient species, your Highness. We can learn much from it. Won't you reconsider?"
"It sneaked aboard my ship, Captain. Three crew members are dead. Kill it."

Far beyond the Empire's frontiers and any known trade routes lay Trellion IV. Founded to establish a simpler life, technology had long since passed it by. But as time surged past the century mark so did the roving gangs of criminals, hoodlums, and thugs. Elite, and fast becoming legendary, the Crimson Band emerged. Everyone knew them for what they were: manhunters.

On a spaceship, there's nowhere to run.

The bi-annual Rise of the Three Moons heralds an eve of ritual bath and cleansing. At first sun, no male may refuse a female's Mating Right.

After centuries of abuse, contempt, and disdain, and years of quiet preparation, the wealthy collectively fled Earth to found their own colony, Solitarius III. Within two years, the economies of the Terran Guild collapsed.

Authorities have initiated a planet-wide program to identify the most fertile women, who are then levitated to a ship occupied by an imported male and remain until confirming impregnation. The move sparked the eruption of a counter-revolution.

For three days the world had watched and waited. Nothing else filled the news nets. When the object first appeared, a panicked rush evacuated the downtown area and authorities cordoned off a ten-mile circumference. Overhead, two fighter bombers flew a holding pattern with their nuclear loads armed. Wild speculation over what it all meant reached a fevered pitch but now the object began to glow. Across the world, mouths hung open as a human-like, caped female emerged.

Tamir stepped from the portal. Wary, alert. Around her beams of x-ray, infrared, ultraviolet, sound probed and scanned. None could penetrate her defenses. Ignored were the myriad audio and video transmitters. Her footsteps struck eerie echoes along the deserted street.

She paused, puzzled by a whining, turbine sound. Internal sensors triangulated the source lifting her gaze upward. Atmospheric flyers. With nuclear devices. Primitive indeed, as the High Council had revealed. Born, engineered, and trained for this moment, pride swelled within. Out of only nine Kronos Swords, the Council had selected her.

The people of this planet remained oblivious to their reality. They existed because eons ago a Temporal Shift had threatened her world forcing them to bang a power surge through the fabric of space/time. Ultimately, Earth, a Child of their own time line appeared. Within moments, another Temporal would strike here, threatening to destroy her own world along with everything and everyone she knew. Already, power swirls presaged its emergence.

She waited with the patience trained into all Swords. Tamir had prepared well. Nothing would deter her from the honor the High Council had placed on her shoulders. She would not fail them or her responsibility.

Force fields hummed and vibrated. Tamir began to raise her sword and placed a shield around the signal transmitting this moment across the globe. None could imagine the power about to be unleashed. The power of a Kronos Sword.

The Romanticists had finally destroyed Earth's weapons of war and dismantled its armies. For two centuries the world knew peace and prosperity. Then the Morphans dropped from orbit.

An homage to the masters Arthur C. Clarke and Stanley Kubrick.

The last known image of Adam Westin, a big game hunter on alien worlds who preferred retro-style weapons to make it "more sporting". He entered the worm gate never to be seen again.

Across the globe, nation after nation confirmed the presence of a massive object in orbit. Then the power went out.

Sarcastically called Handmaidens by sidelined females, when the first one emerged, it sparked a revolution. Her sole purpose was not to obey, or comply, or submit. She wanted only to please.

On the way to work this morning, where industrial plants and storage facilities line both sides of the road, one had an iron bar fence rising in front. Robots swarmed about unloading and opening crates and containers. Later that afternoon, heading back home, I stopped dead in my tracks. Inside the fence sat an air car.

Still new to the world, I had seen a few high up but never this close. Only billionaires, crime lords, or corrupt officials could afford them. And, of course, politicians who often incorporated all three.

The open gate drew me in. As if from the air itself, a female stepped to the entrance, a gleaming Katana blade hitched to her back. A Katana? Who used such a weapon? An expression of mild curiosity or perhaps amused tolerance gave no hint of danger. Or of welcome. Rock steady eyes, glinting with speed of light calculations, locked onto mine. "Hi. How are you?"

Slowly, ever so slowly, her hand moved to the auto gun strapped to her thigh. Fingers curled around the handle, index finger stretched across the trigger guard. Like her eyes, the hand remained rock steady.

The reflection of self

On this planet only one type of DNA exists. It designed all life.