As Khan so elegantly put it: a dish best served cold.

Biker chicks: a tradition extending far back in time.

Tension filled the castle. One question whispered along its corridors. Which sister would survive to ascension?

The 6th 3D image I created.

A father prepares for battle.

We succeeded in walling ourselves off from evolution but not natural selection.

With one grip, a legend was born.

Lomin turned the corner and stepped through the chamber's entrance. Inside, just as the book had predicted, stood four lifelike statues of warrior maidens belonging to a bygone age. Their gold inlays and trim hinted at the wealth hidden within. The old man had been a fool, he thought. Had no idea of the book's worth and yet refused to sell it. Now he would have eternity to contemplate if a knife through the heart was a better bargain.

Ahead, the corridor forked. Which one? He opened the book and turned a leaf. Eyes bulged as sentence after sentence faded from the page. Frozen lungs stopped breathing. Behind him stone cracked and crackled. An unsheathing sword hissed. 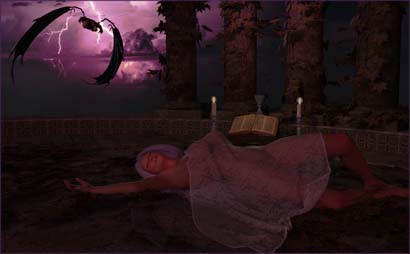 It is a place of ancient whispers and dark enchantments. Of sorcery and devilry. And magic. The old kind that unfurls from the fingertips. Where witches cast spells and summon forth demon lovers.

She had designs on the wizard. Until his wife found out.

Renk could barely contain himself. About to retire, pride threatened to burst his heart from its moorings. The Queen's new Champion wasn't as strong as the men but she was strong enough.

She had lightning reflexes and the sword went exactly where she looked. It made her deadly . . . and his daughter.

Together they battled across barbarian lands until a demon separated them.

"She's one woman. We can just ride over her." "Don't be a fool, Toren. That guard is taught only by the southern masters. You'll be sliced in two before you hit the ground. Best to talk."

At night, the hunted have two legs.

"It is a magnificent sword made of Tamahagane steel mined in the Yamato province of Japan and fired in the forges of the master himself: Amakuni Yasutsuna. It will not break, will not shatter, and will slice through armor and leather."

In Rhesakur, east of Cimmeria, the city that birthed the warrior maidens who roamed the Middle Kingdom, shopkeepers and sellers did not present exaggerated claims. Doing so would risk their heads.

I am the Mistress of Perdition. I am Gehenna, sent by the Lord Master Lucifer. In one hand I hold pleasure, that those who lust for it may find you. In the other, I hold Lust. That you may find those who know its pleasures. Choose well.

When summoning demons, it is wise to remain within the Flames of Kalthor.

Odin give me strength and guide my hand. The shield will not withstand another blast and this beast brims with hellfire.

Some men dig graves. Others fill them.

While hot on the trail of the legendary Cimmerian, Xena would test the virility of potential bed warmers.

Alive! You hear me? Bring them to me alive."

In the aftermath of the Apocalypse, war again became primitive. 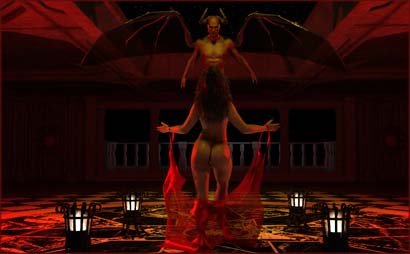 Her sisters completed the Summoning Spell then smiling and giggling, exited the chamber. The Novitiate had prepared herself well and now all that remained to metamorph into a witch were pleasures unimagined and unequaled. Without warning, Kravak appeared. Her eyes traveled down his body, stopped and widened. It swelled. And wiggled.

Tamrin twisted in his chair. The women had heard it too. No wind howled like that. His wide-eyed daughter turned to him. One word escaped her lips as she rushed over. "Papa?"

Arms open, he leaned down, squezing her, refusing to let rising emotions emerge. Gently, one hand cupped her face. "I love you my child. With all my heart. Now. Go to your mother.

Tamrin strode to the door, never hearing the swords he gripped hiss from their scabbards. He refused to look back. It would weaken him. A foot opened the door. Cold blasted his face. They had come to his home. They would not leave it.

Our ancestors could not call police. Could not call firemen. Or emergency personnel. When a crisis arose they had to deal with it. Their successes allow us to complain about the weather.

On a cold and dank wintry night, a soldier stands his post

Tough when all you want is a quick dip and a dragon shows up.

The King had sent his champion to find the three thieves. For weeks he had tracked them but now only two remained. Tormin hesitated. A warning to thieves? Or everyone?

The insanely jealous Baron made one mistake when he killed her lover. He didn't kill her

From this Book and from this Night
I speak true words with all my might
Witches then and Witches now
Must battle those who act most foul
Against our foes I take this action
To flight, to flight, enchanted Dragon

Sometimes Alina's husband walked in unannounced. He remembered not a one.

Both detectives continued to stare at the ash pile where a house had stood. Firemen and arson investigators had never seen anything like it. Neither had they. And they had seen it all. Fires left stone remnants, metal beams, cars, ovens. This fire had reduced everything to a fine powder. "Detectives." They turned their heads in time to see a uniform lift the yellow crime scene tape to let a man duck underneath. He straightened and both suppressed an urge to laugh. With a jaunty fedora low over one eye and a trench coat, he might have just stepped off the set of a noir movie. The stranger held up a badge. "Federal Bureau of Special Investigations? What the hell is that?"

He ignored the question and turned to survey the ash pile. "Never seen anything like it, right? Firemen got here in minutes and the pile had already cooled. Know any fire that can do that?" His head turned back. "I've been chasing a psychopathic coven for nine months now. They lure impressionable, naive young women with visions of becoming witches into their little group. I'm not sure what happens next but this is always the result. It wasn't fire. It was brimstone. And now they're in your town. You'll see a few more of these." He held out a card. "When you run out of leads, call me. Maybe we can catch them before they leave." He turned around and left. The two stared after him.

Beryl turned the corridor, slowing before the doors ahead. Everyone had warned against it. Her best friend had been adamant. "Don't do it Beryl. Witches always demand payment and it's never money. It might be a price you can't pay. You're obsessed."

Beryl stopped. Love, is, an obsession she thought. She wanted Stewart. Could not imagine being without him. Did not want to. Only a Love Potion could help.

Five months had passed, scouring every dark tavern and dank alley the city's backwater hovels offered. Many had whispered one name before turning away: Merlana.

She raised a hand to knock. Before it landed, the doors opened. Beryl's eyes widened. She swallowed hard.

"Welcome, Mr. Daemon. Your credentials were impreccable and the endowment most generous. Shall we see what the Fates have in store?"

in the Baroque style

The morning dawned like any other. Neither would forget the day the King's First Sword happened by

Their laughter pierced the dawn sky. Cruel, merciless, filled with savagery. They plundered and torched, killed and ravaged. All the while they laughed. And laughed. Then they turned toward the women. She warned them he would come for her. They laughed. He did. And swore they would form a mound on the tomb into which he would bury their King. They laughed harder.

Night had yet to retreat before an onrushing dawn. Whispering death sliced into guards just shaking off a sleep they would not awaken from.

Standing along a high ridge line, Merldon allowed for a grim smile. He had recruited the five Montanians himself. Life in the Cappocian mountains required they be able to climb and survival demanded they not miss what they hunted. Scaling the fortress walls had proved child's play.

The thieves never expected a guard. They watched him ease his helmet off, message unmistakable. Templars grew old because their opponents died young.

They crested the hill at a gallop before racing across the plain, pulling the reins to a hard stop, battle steeds snorting and prancing, pulling at the bits, eager to be off again. "There!", Kima pointed. "Just at the treeline. Six of them."

Before they could loosen straps binding swords and shields, the intruders turned, hooves thundering on the dry, unthawed ground, raising a dust cloud behind them.

Moina turned with a broad smile. "Tell me again, sister. What is good?"
"To ride the open steppes, feel the wind in your hair, and watch your enemies flee before you."

With all apologies and great admiration for Mr. Conan and his unwittingly hilarious Mongol warlord.

The image takes its title (mitsu means three, domoe/tomoe means comma-shaped) from the background symbol which in modern Japan is most often displayed on banners and lanterns during festivals and rituals, particularly Shinto ceremonies. In medieval Japan, the symbol identified the wearer as a Samurai warrior.

Yan Mei pulled on the reins staring into the distant mists. Dismounting, she stepped closer, as if the shorter distance would make the tree clearer. For days she had roamed the badlands, constantly moving, asleep in the saddle, determined to lose herself in the wilderness, safe from pursuers.

She had no illusions as to her fate if the Emperor found her. As his favored and prized assassin, she knew too much. Knew where all the bodies lay buried. Indeed, with her loose and uncontrolled, the Emperor himself might fall victim to her formidable and legendary skills.

Certain she saw what she saw, Yan Mei made up her mind. If a single tree could live here, so could she. In the way of all women, she sensed the life growing within her. This would be home.

"Cimmerian! The skills and abilities with a sword given me by the red goddess Scáthach come with a price. I may lie only with a man who can defeat me."

Om the battlefield, no one, absolutely no one, is going to out-style Keesana.

O mighty trees and forest green, if those who come should act obscene, their last will be this ha lo'een